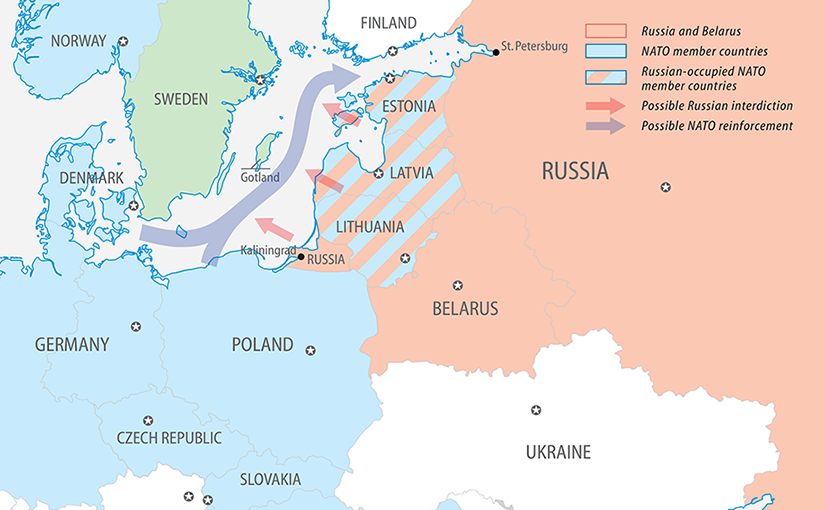 This was developed as notes for an interview with Ole Nyeng for an article in Weekendavisen. However, the editor choose not to use any of the arguments below. Instead the article ended-up being focused on Putin-loyal citizens of Narva that hoped that they would be liberated next after the end of the “operation” against the Ukrainian “Nazis“.

1) The Bad News
• Very long borders to Russia and Belarus
• The limited “depth” of the territory from the border to the sea
• The geostrategic significance and vulnerability of Lithuania: Vilnius’ location close to the border to Belarus; Kaliningrad treatening both the coast north and the Suwalki Gap
• The very small total size of the Latvian forces in relation to the area to be defended and threat from the east and up the coast
• The full dependence on external air support
• The experience of Ukraine regarding the totalitarian warfare of the Russians

2) The Good News
• Geography’s somewhat better support for defensive operations than in Ukraine (but clearly worse than in Finland)
• That the population will act as the Ukrainian, including the clear majority of the Russian-speaking population
• Skilled and highly motivated officers in the armed forces
• The experience of Ukraine regarding the weaknesses of the Russian forces (small size and low fighting value of most infantry; low level of air force tactical and coordination skills)

3) Can they be defended now? Unfortunately only a very short time due to problems:
• The vulnerable sea lines in the southern part of the sea (Kaliningrad and potential Russian capture and use of Bornholm and/or Gotland)
• The uncertain air situation: Lack of well-located NATO bases. This gives Russian artillery the same free and dominant role as we see in Ukraine
• The lack of enough effective weapons for the forces of all three countries (especially air defence; anti-tank; numerous very long range artillery systems including long range sensors; armed drones)
• Lack of powerful Allied presence, especially American

4) What might be done quickly to improve the situation?
• Massive weapons aid to the Baltics (as to Ukraine) in exchange for them quickly developing the size of their forces (in line with the Military Assistance model from the early 1950s)
• Building American and German presence to a substantial level, meaning brigade frameworks, mainly at the Suwalki Gap
• Securing Bornholm against a coup capture (as the Swedes have secured Gotland)
• Preparation of air bases for support of Baltic Defence (best and easiest if Swedish bases were available)
• A rapid American build-up of nuclear deterrence in Europe to deter Russian coercion and limited use
• The creation of a Joint NATO Regional Baltic Sea Command under SHAPE

8 thoughts on “CAN THE BALTIC STATES BE DEFENDED AGAINST RUSSIA?”