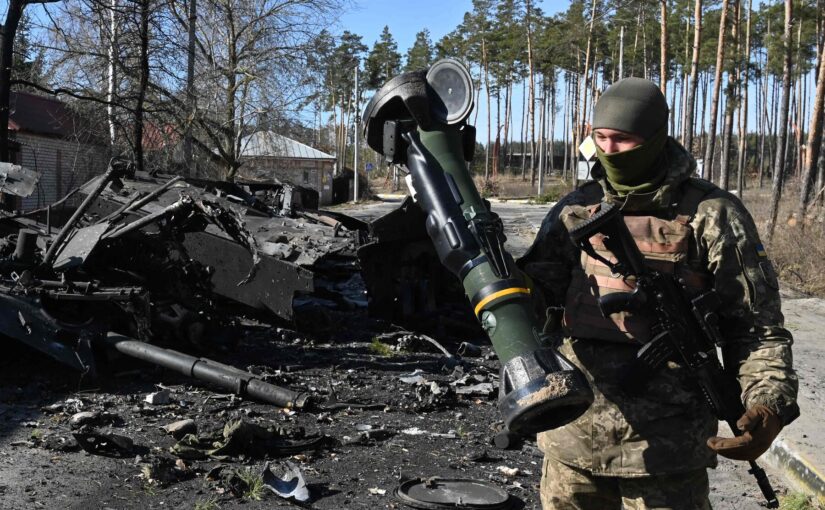 Geography and terrain
The situation maps totally misrepresent the real conditions in the combat area. This is a low-density conflict with both sides only present and in control of a very limited part of the conflict areas. The Russian forward company positions or platoon posts have open space between them not covered by weapons or even surveillance.

As the Russian Civil War was rail-bound, this is road-bound as the Finnish Winter War north of the isthmus. The Russian invasion took place in the mud season and has therefore been fully tied to the roads by their Cold War generation logistics trucks (mostly the ZIL-131 workhorse).

This factor gives the Ukrainians the possibility to move in the unoccupied spaces against the flanks and rear of the Russians … as the Finns did in the Winter War.

Videos make clear that the terrain is far less open than I expected. Hedgerows, small and larger woods, and trees and bushes in village or suburban gardens makes infiltration and ambush possible for the Ukrainian combat patrols, and they use simple commercial hobby drones to gain superior situation awareness.

Command and Control
Instead of using the well-stablished Russian system of appointing and supplementing the appropriate Military District HQs as the coordinating joint “front” HQs for the operation, the Russian leadership has kept operational-tactical control in Moscow and left it to the four involved Military Districts to command various operational groups.

Whether if it is to make certain that all got a share in the honour or to promote competition, it is certain to slow reactions to friction and local failure.

The situation has been worsened with the deliberate Ukrainian campaign to attack the various operational and tactical commanders to decapitate local command and delay reactions.

On the other side the Ukrainians seem to have delegated tactical leadership to the local commander that leads a tailored mix of regular army elements, National Guard and ad hoc volunteer militia groups.

Logistics
The long road-bound columns hamper logistics and medevac support for the forward battalion task group (BTG), and this has apparently been worsened by a lack of attention to this issue. Reports of BTGs running out of food and fuel and of wounded only reaching hospitals (in Belarus) after gangrene his started indicates how critical the situation is.

On the other hand, the Ukrainians can use a combination of prepared military and civilian “total defence” logistics. The main challenge was an effective distribution of the vital arms from the West. Apparently, the only place where delivery failed was in Kherson.

Pre-war expectations and reality
I had followed the reform initiatives under General Gerasimov to create a more competent army, and after the observations of take-over of Crimea and the two effective interventions in the Donbass fighting in 2014-15 as well as the demonstration of new capabilities in Syria,. However I missed that the in deoth improvement has been limited to the staff prepared coordination of more complex operations and to the airborne landing troops (VDV) and naval infantry.

I did not realise that fact the regular army had not disciplined itself to break with the practice of “Dedovshchina”-discipline by mobbing, Therefore it was impossible to create motivated and well-trained citizen conscripts and later good contract soldiers. The Russian leadership and generals apparently has no real feeling of respect and sympathy for their soldiers.

I noted that the Russian Army had recreated several divisions and armies, and I thought that these would be organised as earlier for echeloned break-through operations in attack formations with the ability to take attrition and thereafter succeed. However, the reality was that the divisions and armies were just pools of weak brigades of BTGs advancing in columns on roads. With the total force including the airborne landing (VDV) and naval infantry limited to the 168 BTGs mentioned last year by the Russian Defence Minister, “general” Sergei Shoigu. Therefore, the maximum sum of ground force infantry was 26.000. The airborne added around 6.000 and naval infantry around 2.000 to that number.

The combat power in Ukraine in countering ambushes and in urban combat was totally dependent on the quality and motivation of these soldiers.

Pre-invasion observations
I therefore noted with wonder that the units concentrated to camps in the vicinity of Ukraine since the autumn were kept basically unemployed an untrained in their tents with their vehicles left to deteriorate in the open in the damp and cold winter weather. The only training that I saw was some basic firing range training.
I also noted that the clear majority of the tanks were of 1970s and 1980s vintage, however modernised with reactive armour and better fire-control. Later it became clear that a number of the T-90 tanks were also deployed. No T-14 Armatas.

The same average age was reported for the deployed Russian aviation.

Actual tactical performance of the combat units
The ground force Battalion Tactical Group’s field performance was worse than anything I have seen in my professional life. The motor-riflemen stayed mounted in their combat vehicles or carriers and became casualties there, when fleeing from the striken vehicles or probably of their wounds later on the long evacuation route.

There was apparently no training in counter-ambush drills. There were no developed routines for the close team cooperation between the BTG tanks, dismounted infantry and combat engineers essential for combat in built-up areas. No sign of close cooperation with direct support mortars or any BTG howitzer batteries.

Videos of Ukrainian patrols also showed a low level of field-use skills in the improvised volunteer units. No fire-and-movement drill. However, with use of the open space between Russian units that normally acted in a very predictable way meant that this behaviour apparent rarely brought disaster.

Equipment and its performance
The Russian Army average equipment situation was even worse than I noted before the invasion. Some tank units also had only slightly modernised or unmodernised T-72s, and most carriers were MT-LBs, older BTRs and BMP-1s with no added protection. Only the airborne and naval infantry had new vehicles.

Even on T-90s, the Russian reactive armour boxes have proven incapable of defeating the new Western two-step hollow-charge missiles, and even traditional weapons (such as RPGs or old LAW) could penetrate earlier versions.

Russian tanks are still likely to be destroyed be by explosion of the charges of their main ammunition (leaving the turret blow-off next to the burned-out hull).

Air force performance
It was a surprise that the Russian Airforce failed to achieve air supremacy at the start of the invasion. Not being an air force specialist myself, I have read that the operations in Syria had given a too positive picture of Russian air performance. It was now realised that the missions there were conducted with single aircraft or pair, not as large scale and complex missions. It was now noted that the Russian pilots had relatively few flying hours and these were not used for training in hard missions. Therefor the tactical air operation staffs got no or little practice in planning and controlling large scale and complex operations as one required to destroy or disable the Ukrainian Airforce at the start of the invasion.

Final remarks with warning
I know from correspondence with close contacts how hard it is to acknowledge and accept the Russian military weaknesses shown in the conflict so far. It is apparently too hard to accept that the mighty army that you needed and still need as the defining threat had been so thoroughly defeated by a force inferior in materiel.

However, I miss another explanation how and why the invasion stalled if the reason wasn’t massive losses of personnel and main equipment.

The great Russian Army may be mighty in total size because of having to maintain a full base for operations at most areas of the enormous territory. However, the combat echelon was limited in number of units and therefore tactically defeated, even if the General Staff concentrated around 75 % of all these units for the invasion.

On the other side we find too many eager to conclude that hereby the military threat from Russia has proven to be empty. A historian of Russian reaction to former defeats I must characterise this as irresponsible bullshit. Even if the priviledged had to be brutally purged and disciplined, difficult reforms followed awkward humiliations.

What Russia can achieve in an unlimited mobilisation of society was shown twice in the 20th century. Firstly from 1929 to 1942, and secondly after the humiliation of the Cuban Missile Crisis.

That the latter effort broke the economy and the political system just shows the determination the humiliation triggered in an already demoralised society. Russian arms designers produce some excellent solutions that are ready for mass production when the will and money is made available.

What we see now after the initial failed coup and the stalled offensive of the Russian peacetime army is the call-up of regular reserves to man the normally unmanned units of divisions and brigades and equip them with the remaining vehicles and other equipment of the depots. Whether it is possible to improve tactical performance is to be seen, but the next offensives are likely to be far more deliberate and thus have strong artillery preparation.

One thought on “RUSSIAN-UKRAINIAN WAR 2022: Tentative observations and conclusions by early April.”